League of Women Lawyers of Tajikistan

The League of Women Lawyers of Tajikistan aims at improving the legal consciousness of citizens of the Republic of Tajikistan, the protection of civil, social, economic and cultural rights of women in Tajikistan, gender equality, improving women’s status in society lawyer, as well as assisting in the preparation of legal training among young girls. League was created to fulfill and protect the civil and social rights and freedoms of citizens participating in the creation of a sovereign, democratic, secular and unitary state of Tajikistan, through the coordination and implementation of programs and projects aimed at achieving social development, equal access to opportunities for men and women in all spheres of activity, reducing violence against women and assistance to vulnerable populations and risk groups in Tajikistan. For instance, it:
• Operates a telephone hotline to provide legal and psychological assistance to the population;
• Provides free legal advice and assistance in the forms not prohibited by the laws of the Republic of Tatarstan to women, including mothers of large families, widows, mothers – single, etc.;
• Provides protection for victims of violence during the investigation and in court;
• Conducted an independent examination of draft laws concerning the rights of women;
• Operates on the abolition of the death penalty in Tajikistan
• Conduct thematic workshops in all regions of the country to raise the legal consciousness of the population;
• Prepares and distributes brochures on women’s rights;
• Conducted education on child rights in schools in Dushanbe and other cities and districts.
• Provides legal assistance to former prisoners.

Our organization has been involved in the abolition of the death penalty in Tajikistan since 2000. We hold international conferences and involve government agencies, in particular the Office of the President of Tajikistan. On 17 May 2011, we held an international conference entitled “Central Asia without the death penalty” which was attended by Ruth Dreifuss and Christian Durish Acosta from the International Commission against the Death Penalty. 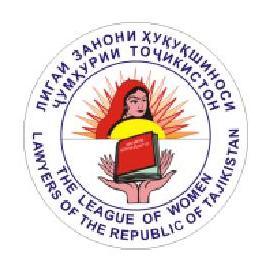