Human Rights Watch is a nonprofit, nongovernmental human rights organization made up of more than 275 staff members around the globe. Its staff consists of human rights professionals including country experts, lawyers, journalists, and academics of diverse backgrounds and nationalities.

Human Rights Watch is known for its accurate fact-finding, impartial reporting, effective use of media, and targeted advocacy, often in partnership with local human rights groups. Each year, Human Rights Watch publishes more than 100 reports and briefings on human rights conditions in some 80 countries, generating extensive coverage in local and international media.

The organisation supports the victims and those who defend human rights to prevent all forms of discrimination, preserve political freedom and protect individuals against inhuman behaviour at times of war.

It calls on governments and people in power to end practices that contradict human rights and to abide by international law in this field. Human Rights Watch invites the general public and the international community to take part in the defense of human rights for all.

With the leverage its work brings, Human Rights Watch meets with governments, the United Nations, regional groups like the African Union and the European Union, financial institutions, and corporations to press for changes in policy and practice that promote human rights and justice around the world.

Human Rights Watch is an independent, nongovernmental organization, supported by contributions from private individuals and foundations worldwide. It accepts no government funds, directly or indirectly. 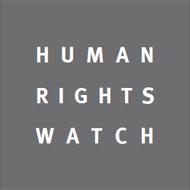 Juvenile Offenders Awaiting Execution in Yemen : “Look at Us with a Merciful Eye”