Niger has applied a moratorium on executions since 1976 but jurisdictions continue to sentence criminals to death. In January 2011, Niger accepted recommendations by the United Nations Human Rights Council at the 10th session of the Universal Periodic Review (UPR) to abolish the death penalty and to ratify the UN Protocol on abolition.
To implement these recommendations, the Nigerien government approved a bill authorising accession to this Protocol on 23 October 2014. If the bill is adopted by parliament, Niger would become abolitionist for all crimes. The bill was sent to the National Assembly and is likely to be examined during the current parliamentary session in May 2015.

Call for vote on abolition law

To accompany this process, FIACAT and ACAT Niger organised a seminar with 25 Nigerien opinion leaders (imams, pastors, priests, tribal chiefs, magistrates, lawyers, trade unionists, journalists, representatives of civil society organisations and members of the National Human Rights Commission) to strengthen their ability to advocate for the abolition of the death penalty.
The participants attended a number of talks on the death penalty in Islam, Christianity and in Nigerien tradition and the role the media can play in sensitizing the public. These talks were followed by numerous debates.
At the end of the meeting, the participants adopted a final declaration which urges Nigerien members of parliament to vote in favour of the bill on the abolition of the death penalty. 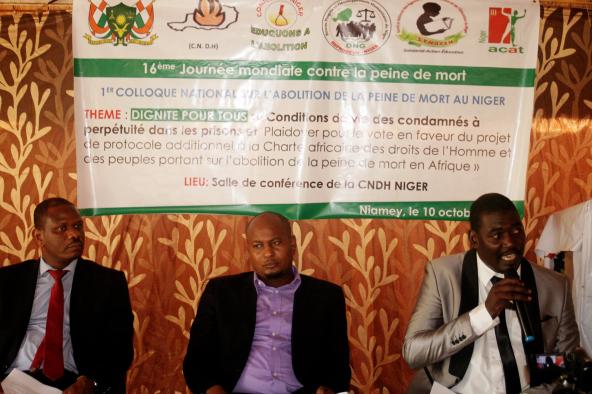 First symposium on the abolition of the death penalty in Niger