On 25th April, the day after the opening ceremony of the 64th Ordinary Session of the ACHPR, a panel on the death penalty was held. It was organized by the ACHPR’s Working Group on the Death Penalty and Extrajudicial, Summary of Arbitrary Killings in Africa in collaboration with the World Coalition, FIACAT and FIDH. Moderated by the Chairperson of the Working Group, the Honorable Commissioner Zainabo Sylvie Kayitesi, the panelists spoke openly about the necessity of abolition and the steps some countries have taken to get there. Bafou Jeng of the Attorney General’s Chambers and Ministry of Justice of The Gambia spoke of the steps that have been taken nationally over the past year to commit to the abolitionist cause. Paul Angaman, President of FIACAT, and Cheikh Barham Aboubacar, the President of the Intra & Inter Religious Dialogue Committee in Niger, elegantly highlighted the reasons for abolition, the latter focusing on religious reasoning in Islamic texts to promote repealing capital punishment. Lastly, Arnold Tsunga, Vice President of FIDH, spoke of the use of the death penalty today on the African continent, focusing on the most active retentionist country within the union: Egypt. Indeed, while the most recent global statistics published in Amnesty International’s Global Report on the Death Penalty show a continued global trend towards abolition, Egypt remains an outlier with a confirmed 43 individuals executed in 2018 and an astonishing 717 sentenced to death.

Egypt was among the three states being reviewed during this session by the ACHPR, submitting their 4th periodic report earlier this year (the other states being reviewed are Lesotho and The Gambia). Following the concluding remarks of the panelists, the Representative of Egypt quickly took the floor. He reiterated what was stated in the Egyptian report vis-à-vis the death penalty; namely that the practice remains “lawful under Egyptian penal code and Egyptian sovereignty” and applied only in the “most serious-crime scenarios”.

However, this statement does not reflect the reality in which death sentences are handed down in Egypt. As noted in a shadow report co-submitted by the World Coalition and the Advocates for Human Rights to the ACHPR earlier in April, Egypt does not reserve capital punishment for the most serious offenses and has applied the punishment to offenses that did not result in death of the victim. Indeed, more and more the death penalty is applied to cases of political dissent and following trials en masse.

Training the World Coalition’s Network on Advocacy with the ACHPR

On the 23rd April, before the start of the session, the World Coalition in partnership with FIACAT held a training workshop for interested members focusing on how to advocate within the ACHPR body and what to expect during ordinary sessions. Still in its trial phase, the bi-lingual workshop (French and English) put in place by the World Coalition during the ACHPR’s ordinary sessions included 12 participants, many members of the World Coalition, and hailing from countries all over the African Union: Liberia, Sierra Leone, Cameroun, Morocco, Democratic Republic of the Congo, and Côte d’Ivoire. Lawyers and activists alike participated in this half-day training that reviewed the role and function of the ACHPR as well as the numerous methods available to civil society to advocate for human rights causes- particularly for the abolition of capital punishment.
Together, the participants role played giving oral statements on the floor of the session, learned the nuances of drafting and submitting shadow reports to the ACHPR, as well as a myriad of informal ways on how to interact with ACHPR commissioners and the secretariat. “I learned new things on human rights and the death penalty in Africa. Of course [this] training was useful and increased my advocacy skills and helped me build counter arguments for the total abolition of the death penalty” stated Komrabai Dumbuya of the Sierra Leonian NGO Many River Youth Parliament. An overall success for students and teachers alike, the World Coalition is looking forward to improving their pedagogical technique for the next ordinary session.

A reoccurring characteristic of the session in Sharm-el-Sheikh was the limited space created by the host country to allow civil society to operate. Egyptian authorities worked hard to place restrictions on the  present including but not limited to denying certain individuals entry visas, denying access to private meeting rooms in hotels to hold side-events, and limiting any civil society gathering to the session’s venue, the International Congress Center, where a constant presence of the Egyptian government was felt. The Egyptian authorities also took over the role of issuing identification badges for entry into the venue.

The World Coalition and their partners were no exception to this clamp-down. The World Coalition was denied access to numerous private hotel rooms to hold their training session. Eventually, a space was secured within the International Congress Center. As a consequence, the training which was previously scheduled for a full day was reduced to a half day.

During her opening statement on behalf of the NGOs Forum, Hannah Forster, Chairperson of the NGO Steering Committee stated; “Participants at the [NGOs] Forum expressed dismay at the number of NGOs denied visas. Furthermore, some of them complained about facing prohibitive rate that curtailed their engagement of sharing side-events.” Also mentioned was a letter of protest written by the NGOs during the Forum addressed to the ACHPR to highlight the poor treatment. 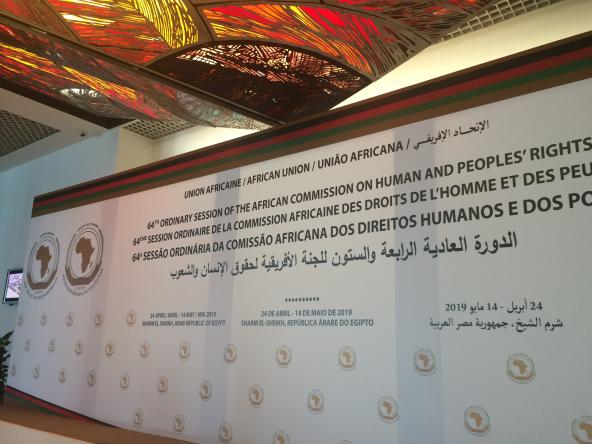 The ACHPR Moves Online, along with Advocacy to End Capital Punishment 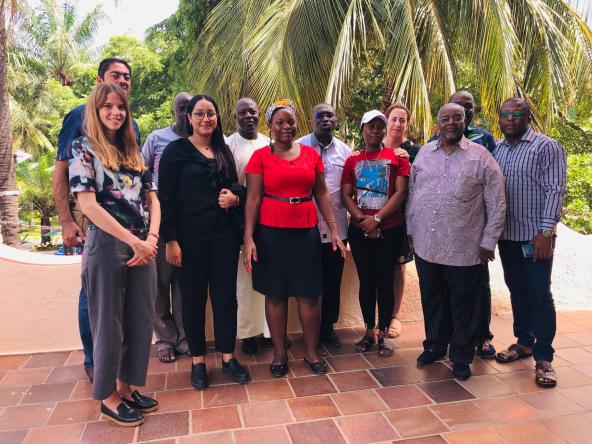 Children and the death penalty in Sub-Saharan Africa: NGO Forum and the 65th ACHPR Session

73rd Ordinary Session of the African Commission of Human and Peoples’ Rights: In- Person, Advocating Against the Death Penalty