Founded in 1986 and registered in 1987, the Human Rights Commission of Pakistan (HRCP) is an independent, democratic, nonpartisan organization committed to supporting human rights in the country. Over the last three decades, HRCP has worked for women’s empowerment and gender equality, the rights of religious minorities, rule of law and access to justice, democratic development, the elimination of forced labour, children’s rights, prisoners’ rights, labour rights, the rights of internally displaced persons and refugees, the abolition of the death penalty, the elimination of torture, and an end to enforced disappearances, among other areas.

HRCP’s goal is to realize the entire body of human rights, as defined in international instruments, by all citizens of Pakistan as well as all persons present otherwise in the country. HRCP believes that this goal must be realized without any distinction or discrimination on grounds of gender, race, religion, sect or belief, ethnicity, area of origin, disability, sexual orientation, or socioeconomic status.

HRCP is committed to the abolition of the death penalty. In this context, HRCP collates and digitizes related data, carries out campaigns to advocate for abolition, conducts fact-finding missions to investigate issues related to the death penalty, and lobbies with the appropriate authorities to reintroduce the moratorium with a view to ultimately abolishing capital punishment.

It has published two reports on this issue in conjunction with FIDH: Slow March to the Gallows: Death Penalty in Pakistan (2007) and Punished for Being Vulnerable: How Pakistan Executes the Poorest and the Most Marginalised in Society (2019). 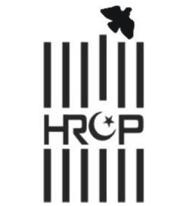